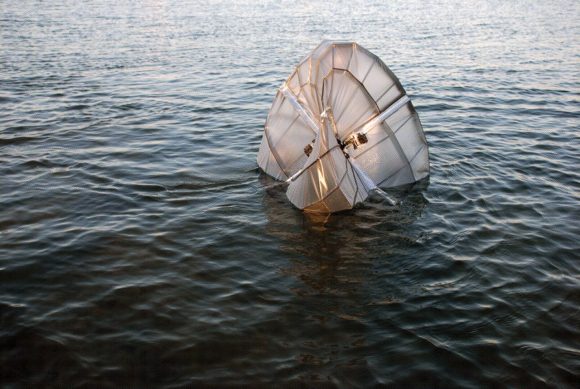 Maritime Craft is a project/installation that explores the port landscapes of San Diego and Yokohama. The project documents a singular object and the world it sees. Floating on the Pacific Ocean off the coast of Japan and California, the object absorbs visual data with multiple HD cameras. These streams of information are replayed in the gallery alongside various scaled versions of the object itself, and an interactive object. In the gallery, these sculptures transform from an obscure object to an icon through which the observer can see. This vision simultaneously exposes the differences and similarities of two cultures across the sea. At no point are words needed in this installation, imagery and sculptures stand alone without translation.

DIRECTORS NOTE
The borderless world the ‘eye’ discovered
That bright and shining nation, a center of culture and economic activity. That was always how we admiringly viewed the United States of America. “America” was our dream.
Although we somehow realized that the great nation had been changed, in trying to avoid the reality it seems we never became aware of just how much it had changed. Then one day, a team from San Diego came for Port Journey came and showed us how the map of American economics had become skewed in favor of the east.
They passionately discussed with us the possibilities and limitations of art. We got the sense that America may have changed in some ways, but in others it had not. That eternal cheery optimism, for example.
Our lifestyles have always leaned towards Europe and their rich cultural history. So what a shock to suddenly encounter the ash-colored winds and smells of the earth. The artwork they brought to us was bare, looking something like a strange living creature; we felt its plainness and roughness to be strange yet new and different at the same time.
The sights of the cities of both San Diego and Yokohama that we saw through the “eye” of the clumsy object were both beautiful and not-so-beautiful, but definitely real. Sometimes it would show us a military base from among the murky water, at other times we would be shown a glittering city.
The object gave Port Journey project, the aim of which is the sustained exchange of diverse cities, the opportunity to consider the importance of knowing one’s city by looking at the cities and their parts objectively.
They finally came after a half a year of Wi-fi conferences. Eventually everybody become involved around the object itself.
The two artists enjoyed watching that process as they took it out into the town. Braving the winter winds, they made us forget the cold with their attitude of “Let’s just have a good time!”

ARTIST NOTE / PATRICK SHILDS
Reflecting on my experience in Yokohama I appreciate the insight I gained into this culture that was unfamiliar to me. Moving through the city on trains, taxis, and foot while observing the architecture and seeing the unfamiliar signs provided an introspect view of what place can means. The time enabled me to think on how the fundamental human experience everywhere is at its core the same and everyone appreciates sitting down with new friends to experience good food after a day of work. We were fortunate to work in collaboration with Zou No Hana and Tim to bring an experiment about cross-cultural exchanges to life. The project has shaped many directions I wish to explore in the future about the physical and mental environments that people inhabit.

ARTIST NOTE / TIM SCHWARTZ
This was a fruitful and interesting collaboration. It was wonderful to work with Patrick and the ZOU-NO-HANA staff to realize this project. While performing the project and collecting the visual data, I was able to engage with people on the streets of Yokohama and San Diego whom I would never come across in my normal life ― this was an exciting exchange and learning experience. The installation itself brought Patrick and my ideas together in a new way that we hadn’t considered until we were actually in the gallery space together. What we created could never have been done individually. These challenges and surprises are what excite me about working collaboratively.

Organized by: Zou-no-hana Terrace
Special grants by: Embassy of the United States of America
In corporation with: The Periscope Project