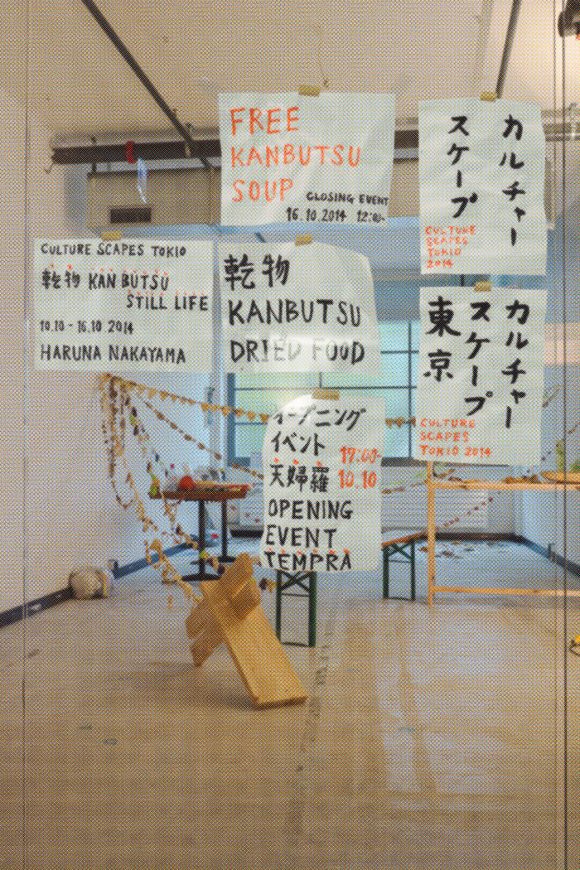 KAN-BUTSU BASEL
This was a performance conducted by overlapping the layers of culture in producing dried goods by traditional Japanese methods in Switzerland’s climate, similar to Japan. Processing more typically Swiss foods such as dairy products and meats, I entertained and served soup to visitors at the marketplace.

This exhibition was held as a program of “CULTURESCAPES Tokio 2014”, held in Basel in celebration for 150th anniversary of diplomatic relations between Swiss and Japan. www.culturescapes.ch

※ About KAN-BUTSU
In Japan, there is very traditional food called ‘kan-butsu’. It means dried food (vegetables, sea weeds, TOFU, of course fruits and nuts), and inevitable in authentic Japanese food, especially home made meals, as it has rich nutrition and well-conserved. Haruna sometimes focuses on the local food as ingredients for the food workshop, and in Basel, she put her eyes on the Swiss original dried food ‘Muesli’ and dried several fruits, vegetables, ham/salami, cheese and other food to install like the mobile toy in Markethalle and extract the special bouillon.

DIRECTORS NOTE
Haruna’s work involves all senses and goes beyond that. The aesthetics of the used material, wood and paper show the dedication and awareness of origin and authenticity. The food being “used” have been part of the transformation process from hanging, drying, cutting, cooking.
The community involvement and access to her work was maybe most important showed by the open market-stand and working in a public space, inviting people passing by to taste and to contribute.
In that way the work is clearly also a communication tool, a moment for sharing space, time and taste. Elements of our modern lives which are disappearing so often.
Haruna appears in this as artist, cook, and above all as a reachable communicative human being. The possible “translations” of this to other fields of our life are obvious and never-ending. Art as Life.

ARTIST NOTE
Basel has climate, geography, and cityscape somewhat similar to a Japanese city. I am accustomed to throwing myself into my work as an outsider, so Switzerland’s third city Basel was a parallel city with Tokyo in my mind. The people of Basel often go to neighboring Germany or France to shop for food. It’s fresh, sold by the people who grew it, and cheap. A kind of happiness that many take for granted, but never encountered in Basel itself. Of course if one goes to the out-skirts, dairy products are produced and there are fields and fields of vegetable crops. But in Basel where the people live one cannot hide the reality of its food vacuum.
Next to Basel Station is a covered market called Markthalle in which I stayed, carrying on communication with sixteen food-stall operators from different countries. That was a group of owners of tiny businesses choosing to live in this city. In a city empty of agriculture, these people from different countries gather to support the city dweller’s lives by providing their daily bread, and choose food as their means of a living.
Tokyo and the rest of Japan will likely find themselves in such a situation some time in the future. What will we do about it? I thought about this question as I continued threading the ever-so-finely sliced Swiss food I was preparing.