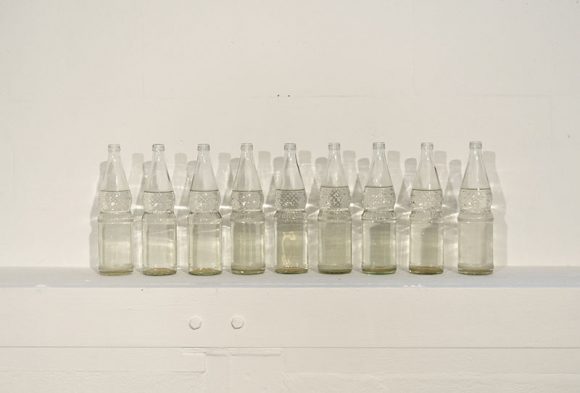 This project aims to taste the water from the river flowing through the city by cooking traditional local soup. Since 2011, this project has been conducted at different locations around the world. This time, a performance was held by providing soup to the audience made from water from the Elbe river at the same place where Joseph Beuys seems to have realized a project.

TO THINK US AS RIVERS FROM ITS SOURCES

For me it is always a chance to understand the approach of artists when I consider the base of  their aesthetic concept. Words, images, symbols are playing in an aesthetic mind flow and figure out an unseen view to ourselves.

Miku Sato brought us to the river – to a geographical, a cultural, a historical, a metaphorical momentum of our “vita activa”. The river gives us inspiration, gives us a reflection of our nature and leads us to a poetic recognition of ourselves as both individual and collective actions.

The river brings us water and is feeding us in a physical and narrative sense of cultural understanding. The water is in ourselves, the water is connecting us as a medium of communication between all life on this planet.

Miku Sato invited us to taste three different soups made from water from the river Elbe. The Elbe is one of the longest European rivers, springing up in the east of the continent and leading its stream to the North Sea. Hamburg and its culture are founded because of this waterway.

For the second time, Hamburg and Yokohama work on the theme of global migration, political action, and world culture. Together the artist gives us a chance to taste diverse culture from only one bowl – literally an aesthetic medium of artistic understanding. The role of an acting young artist is showing us her direction on how to see our times, needs and chances to communicate together.

By tasting the soup of world’s rivers, Miku Sato invites us to re-think ourselves through the waters of cultural springing from common sources.

As I was about to make a sojourn in Hamburg, Germany, the first thought that came to my mind was Joseph Beuys.  He, a German artist everyone knows, was one of many great artists who have exerted much influence on me.  I hastened to make a search for  “Joseph Beuys, Hamburg”, looking patiently for something interesting.  I came upon the project “Elbe Aktion” (Elbe River Action) for cleaning the Elbe River in 1962. This was one of Beuys’ early activities leading to the project of planting “7,000 oak trees” that started in 1982. It appears that not much information on this project is available, but I also have been engaged in a project concerning rivers.

In a simple action calling for people to use river water in making soup and eating it, I have presented the project in several cities in the world.  Most creatures have been nurtured near the waterfront, and our ancestors lived by the river or lake to develop cultures.

At the waterfront, there have been countless conflicts and contentions.  Soup is signified as a cultural identity.  Almost all cultures have unique one-of-a-kind soups served in different bowls.  Soups, having different significance by cultures, are capable of comforting people and restoring energy, so I believe.

In Hamburg, we made a variety of soups familiar in respective cultures by using the Elbe River water in collaboration with the local Germans (political activist Stefanie Wolpert and Anne-Marie Hovingh), an immigrant Moroccan (university student Salma Sbou) and myself (Japanese artist Miki Sato), which we served to a crowd of spectators.  In fact, the water of Elbe River, running through big cities, was so murky.

Many people from various cultural spheres live in segregated areas in Germany to coexist.  Those who came to study, to earn money, or to flee from suppression, and I as a temporary visitor, get together at a little party.  Now, it is your turn to go for relishing together some soup made by your stranger neighbors from the dirty water of a river running in your town.

River water, coming from nowhere and shared with many creatures including ourselves, flows away somewhere into the ocean.