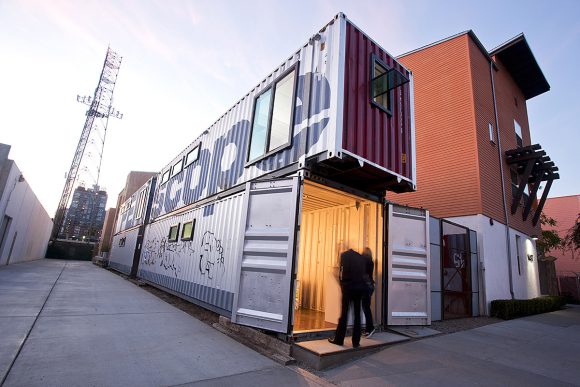 San Diego (CA) is a sunbelt port city on the Pacific coast of the Southwestern United States located south of Los Angeles. As a region, it owes any understanding of itself to a complex account of transborder politics and cultural histories. Most notably, as an urban and ecological conurbation with Tijuana Mexico affected by US militarism, immigration/migration, labor and tourism spatial economies.

The Periscope Project (2009-14), stood as an experiment in alternative urban development which operated on a sliver lot in San Diego’s East Village. The project served as an open community, collaborative exhibition, and residency space. Led by the Enoses, five intermodal shipping containers housed an artist cooperative posthumously born from the network of Petar Perisic, which in turn activated numerous public programs. The Periscope Project was a public monument, alternative land-use, and 501(c)3 organizations committed to a nexus of art, architecture, educational, regional and global urban issues. Frequently working with new intuitional collaborators, such as the Oceanside Museum of Art (2013-15 Exploring Engagement supported by The James Irvine Foundation), James A. Enos has served as its city project director and curator for Port Journeys since 2011. (And still works with a standing network of Periscope Project organizers, artists, and collaborators to this day.)