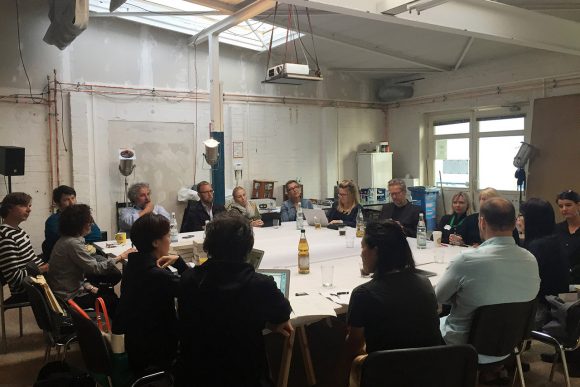 For the third time artists, cultural activists, and theorists from different countries gather for the Port Journey annual meeting, which will be held in September 15-18th 2016 in Hamburg, Germany, at the Art Center HyCP/FRISE.

Port Journey, an international network for art and culture, will come together in September 2016 in Hamburg for the annual Port Journey Conference. The international meeting of artists, cultural activists, and theorists questions the outdated concept of culture as identity. With an international line-up of an exhibition, workshops, talks, and discussions Port Journey intends to open a forum for an enlarged perspective on culturality in our globalized world.

The Port Journey Meeting is being presented and organized by the FRISE Art Project “HyperCulturalPassengers” (HyCP). Within an international exchange forum, HyperCulturalPassengers explores the figure of the Hypercultural Passenger as an alternative to the fiction of the autonomous ego. The project is set to run for two years.

What’s the meaning of art and culture in a world of simultaneity, a world in which European tourists take a swim in the same waters of the Mediterranean Sea in which refugees, deprived of their existence, drown by the hundreds? What’s the meaning of identity in globally digitalized times, seemingly without limits for some, while many still don’t even have access to clean water? What’s the promise of the word culture in a world of mobility taking a shortcut by supersonic speed, therefore making distances more and more insignificant and places getting closer, while rich countries build up new borders? What’s the meaning of identity, culture, and art from the Non-European points of view of the East and the South? How can we resignify the ideas of art, culture, and aesthetics in a way that leaves behind identarian fixations?

Review of the program